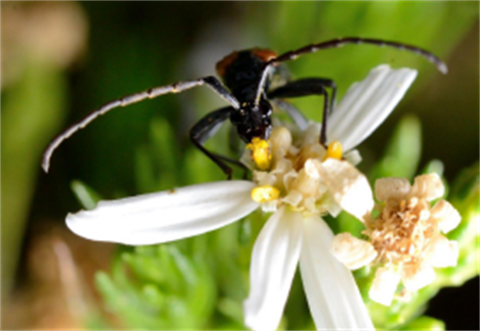 In January David Maynard and Simon Fearn from QVMAG Natural Sciences travelled to King Island to undertake a survey of the terrestrial invertebrate life. Supported by the QVMAG Friends, this project aimed to develop a baseline collection of insects and spiders; prior to this only one limited survey had occurred in 1906 meaning that the invertebrate fauna was basically unknown.

King Island is a place of unique natural resources that support a community of around 1800 people and three main industries: agriculture, fisheries and tourism.

The island’s vegetation communities have been modified and fragmented since it was opened up to free settlers in 1888. Today the island has about one-third of its original forested area, and other natural habitats like extensive lagoon systems have been converted to pasture. These significant changes have caused historical species extinctions, and today a number of species are still at risk of extinction.

Yet, all is not doom and gloom for the island’s wildlife. King Island has some great but unknown biodiversity-related stories. Join David and Simon to hear about the rediscovery of a flightless stag beetle, a new genus of wolf spider found beside a lake, the discovery of a katydid, previously only known from Mount Kosciuszko, and how proposed conservation actions will benefit the island’s bird, mammal, reptile and invertebrate wildlife.